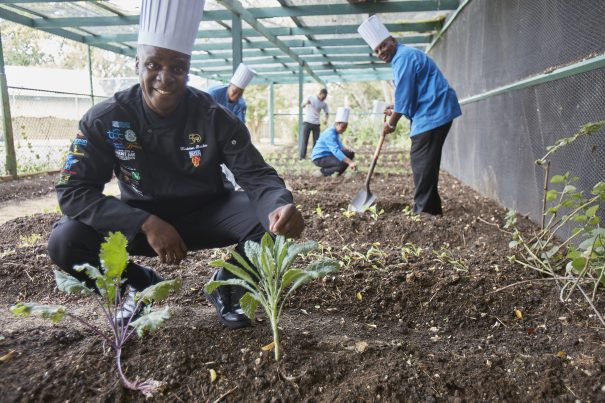 When you stay at Divi Southwinds Beach Resort on Barbados, a small garden plays a big role in the meals you eat. Executive Chef Henderson Butcher grows most of the herbs that flavor the pureocean menu—as well as a few fruits and vegetables—right on the resort property. It can be difficult for “locavores” to make sure they keep eating locally when they’re on vacation, but pureocean Barbados makes it simple.

Chef Henderson believes that fresh herbs and produce grown locally are far more flavorful than anything shipped in from elsewhere. The proof is in the pudding, as they say, and he’s tasted it countless times as he prepares his meals.

He’s also a strong believer in the farm-to-table concept. “Every morning, our employees go out to the garden and gather only what they need for the day,” Chef Henderson says. “It’s best to keep it simple, and to use what we have right here.”

Chef’s garden changes according to the season, but a diverse array of herbs can usually be found there, including thyme, marjoram, rosemary, basil, lemongrass and chives. He also grows spinach, a common ingredient in pureocean’s vegetarian offerings, as well as several varieties of lettuce. “We’re growing a few different kinds of hot peppers now, too,” Chef Henderson adds. “Scotch bonnet peppers are a common ingredient in Caribbean cuisine—we keep a patch of those. We also grow ghost peppers, some of the spiciest peppers on record.” He laughs. “We use them more than you might think. We make a jerk sauce that’s pretty mean.”

In his recipes, Chef Henderson also makes use of other plants that can be found around the property, such as mangos, breadfruit, almonds and even the leaves of the sea grape tree. Whenever possible, he makes an effort to source his ingredients locally. “It’s good for our budget, but most importantly, everything tastes better when it’s fresh and straight out of the ground,” Chef says.